Woman of the Week

Zerelda Gray Wallace, a temperance reformer, women's rights advocate, missionary worker, and public speaker who was born on August 6, 1817, is this week's Woman of the Week. 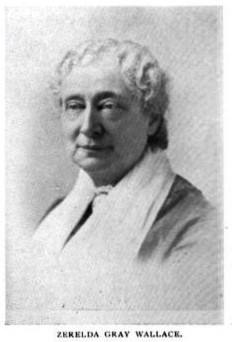 Zerelda Gray Wallace was born in Millersburg, Bourbon County, KY on August 6, 1817.  She was a temperance reformer, a woman suffragist, a public speaker, and an author.

Zerelda spent her youth in Millersburg and her teenage years in New Castle, KY and Indianapolis, IN.  At age nineteen, she married Indiana's Lieutenant Governor, David Wallace, and became stepmother to his sons.  One of those sons was Lew Wallace, who wrote Ben Hur and used Zerelda as the model for the mother in the book.  David was elected to Congress the next year, and Zerelda spent some time in Washington, DC.

She was a member of the Woman's Christian Temperance Union, as well as the first President of Indiana's chapter, and Zerelda spoke frequently about the cause.  Also very involved in the suffrage movement, Zerelda was an active participant in the Equal Suffrage Society of Indianapolis.  Zerelda participated in many conventions, including the National Woman Suffrage Convention in 1880, the first International Convention of Women, the Suffrage Convention in 1887, and the Women's Council in 1888.  She also lectured about women's rights.  In addition, Zerelda was involved in missionary work for her church, the Central Christian Church.  Her publications included A Whole Humanity (1887), Mrs. Wallace on Equal Suffrage (1890), and Suggestions of a Line of Study: For Woman Suffrage Leagues and Good Citizenship Clubs (1891).

Zerelda embarked on a lengthy lecture tour in 1891.  After she became seriously ill during a lecture, Susan B. Anthony and Frances E. Willard were just two of many friends who inquired about her health. Fortunately, Zerelda recovered from this illness and another one in 1896.

During her later years, Zerelda lived with family members in Cataract, IN.  She passed away on March 19, 1901.