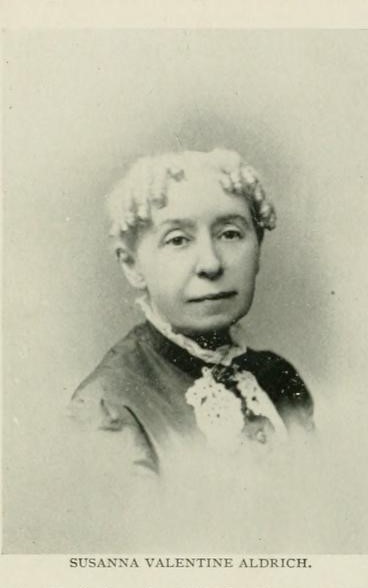 Having loved writing from an early age, Susanna became a contributor to periodicals and magazines.  She also was a very talented hymn writer.

Susanna passed away on November 30, 1905, and was buried in Mount Auburn Cemetery. 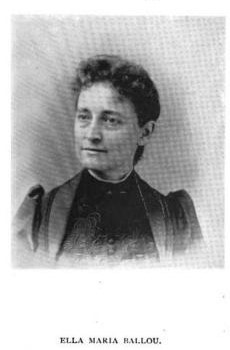 In 1885, she became the first female reporter for the Rutland County Court.  Later, she added Addison County to her duties.
Ella also was a writer.

Ella passed away on July 29, 1937, and was buried in Green Hill Cemetery, Wallingford, Vermont. 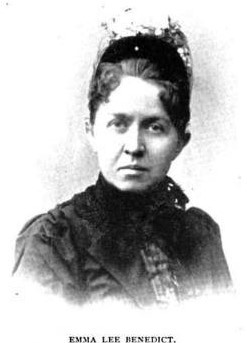 Emma Lee Benedict, born on November 16, 1857, was a native of Clifton Park, New York.  She was an editor, educator, author, public speaker, and temperance reformer.  Passionate about education from a young age, Emma was a graduate of the State Normal School at Albany and the City University of New York.  In addition to teaching, Benedict edited “The New York School Journal.”

Also interested in writing for children, Emma penned “Pieces to Speak.” Lee and Shepard of Boston published this book which received praise from The Morning Call of San Francisco.  Similarly, The New Haven Daily Morning Carrier Journal gave a positive review to Emma's The Gregory Guards, another book for young people, calling it: "A story of reaping good by doing good, bright and entertaining and full of life, incident and good sense."

Through her work with the Woman's Christian Temperance Union, Emma was affiliated with Mary H. Hunt.  Speaking of her extensive research related to temperance, Benedict's A Woman of the Century profile notes: "There is probably no other person more familiar than she with the whole subject of the nature and effects of alcohol on the human system" (74).  She and Hunt exerted a great deal of effort preparing teaching manuals on the topic.

Emma married C. Frederick Transeau in Boston on November 28, 1895.  In 1900, she was living in Westwood, Massachusetts, and working as a journalist.   During the first decades of the new century, Emma continued her crusade against alcohol by writing articles, non-fiction books, and temperance fiction.  In addition, Emma was an officer of the Scientific Temperance Federation.  Beginning in 1923, she wrote the “What the Current Magazines are Saying about Prohibition and Law Enforcement” column in The American Issue.  Emma published her last book, Knotty Problems Regarding Moderate Drinking, in 1935.   She  passed away in Boston two years later and was buried in Clifton Park Baptist Cemetery, Clifton Park, New York. 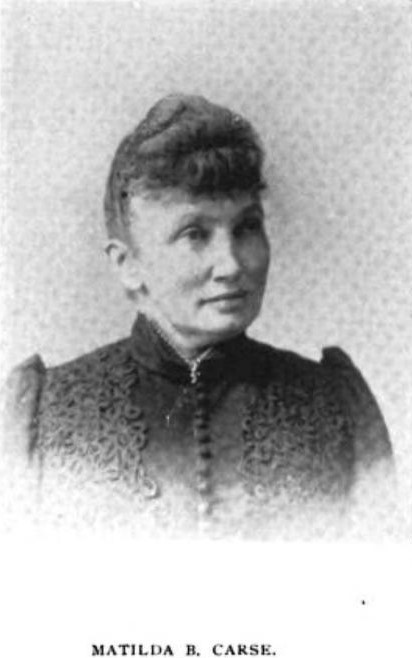 Matilda B. Carse, a Belfast, Ireland native, was born on November 19, 1835.  She became involved with the temperance cause after the tragic death of her young son due to a drunken wagon driver.  For the rest of her life, this philanthropist toiled for temperance reform and supported many other causes.

As a very active member of the Woman's Christian Temperance Union, Matilda, sometimes referred to as Tillie, worked closely with Frances Elizabeth Willard and Julia A. Ames.  One of her greatest achievements was gaining the funding for and ensuring the creation of the Temperance Temple in Chicago.

Along with its founder Dr. George E. Shipman, Matilda raised money for the Chicago Foundlings Home, an organization devotied to aiding orphaned children.

Tillie passed away in Park Hill, New York, on June 3, 1917.  She was buried in Chicago's Rosehill Cemetery and Mausoleum.