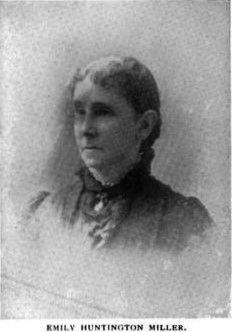 Emily Huntington Miller was born in Brooklyn, Connecticut, on October 22, 1833. She was a writer from a young age, and she graduated from Oberlin College.

In 1860, Emily married John E. Miller, whose career achievements included being a principal, a professor, and the publisher of  Little Corporal, which later merged with St. Nicholas. Emily, John, and their children lived in Granville, Illinois, Plainfield, Illinois, Evanston, Illinois, and St. Paul, Minnesota. Emily wrote for and edited Little Corporal, and she contributed to newspapers and periodicals such as Harper's Magazine,The Independent, and Our Young Folks.  A prolific author, Emily penned several books, including The Royal Road to Fortune (1869), Hang Up the Baby's Stocking (1870), The Parish of Fair Haven (1876), What Tommy Did (1876), The Bears' Den (1877), Captain Fritz: His Friends and Adventures (1877), Summer Days at Kirkwood (1877), A Year at Riverside Farm (1877), and Little Neighbors (1879). Also a lyricist, she wrote the words for Only Four! Song and Chorus (1868), by George F. Root. In addition to her literary career, she was involved with missionary and Sunday school work for the Methodist Episcopal Church. From its start in 1874, Emily was active in the Chautauqua Literary and Scientific Circle. She also was an early temperance advocate.

After John's death in 1882, Emily continued her literary activity. She wrote for various periodicals, including Atlantic Monthly and Ladies' Home Journal,and published books of prose, poetry, and lyrics, including Home Talks about the Word: For Mothers and Children (1894), Songs from the Nest (1894), From Avalon, and Other Poems (1896), and An Offering of Thanks (1899).

“MILLER, Mrs. Emily Huntington,” A Woman of the Century: A Crowdsourcing Project of the Nineteenth and Twenty-First Centuries, accessed September 28, 2022, http://marykatemcmaster.org/WOC/items/show/181.