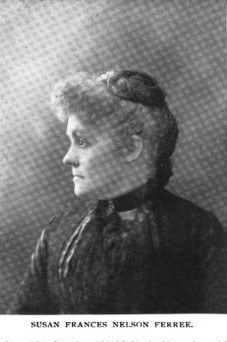 Susan Frances Nelson Ferree is our Woman of the Week.  Please view the link in our profile to see links related to Susan.

Susan Frances Nelson Ferree was born in Mount Pleasant, Iowa, on January 14, 1844, and grew up in Keokuk, Iowa.  She married Jerome D. Ferree in 1860 and had several children. From the 1860s to the late 1870s, the family first lived in Keokuk, Iowa, and then moved to Ottumwa, Iowa.

Her A Woman of the Century profile notes:

"Mrs. Ferree is a great lover of poetry, of which she has written much, but she excels in journalism.  Some of her newspaper correspondence from Washington, D.C. is exceptionally fine.  She is an untiring worker for temperance and for the advancement of woman (sic).  She is a member of the Order of the Eastern Star, Woman's Relief Corps, the Iowa Woman's Suffrage Association, and the local Woman's Christian Temperance Union, and a communicant of St. Mary's Episcopal Church of Ottumwa" (287).

In addition, Susan was a member of the Daughters of the American Revolution.  She was one of the three Ottumwa, Iowa delegates to the DAR meeting in Washington, D.C. in 1901.

Susan and Jerome were living on Ingraham Street in Los Angeles, California, in 1910, but they moved to San Diego, California, the following year.  After she did not accompany him to Arizona, the couple divorced in 1913.

Susan passed away in Monterey, California, on September 30, 1919, and her ashes were buried in the family plot in Ottumwa.

“FERREE, Mrs. Susan Frances Nelson,” A Woman of the Century: A Crowdsourcing Project of the Nineteenth and Twenty-First Centuries, accessed December 3, 2022, http://marykatemcmaster.org/WOC/items/show/209.