For the Fourth Piece of the Puzzle, Dr. Kelly gave the following instructions:

Select an image or video file that is related to your final project idea. Post it in your blog and describe why you chose it and how it might be difficult for students and others to make sense of. 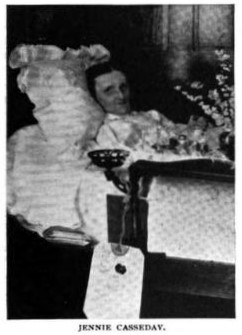 This is an image of Jennie Casseday (1840-1893) from Louisville, KY, one of the women in A Woman of the Century.  I selected this image because I remember not knowing what to make of it when I first saw it.  At first glance, I thought it was an image of a woman in her coffin.  However, I quickly realized that it was a woman named Jennie Casseday lying in bed.  I could see the flowers on her bed, but I did not know why they were in the photograph.

While perusing A Woman of the Century, one sees images of over a thousand women.  Most are head and shoulder photographs, so someone might concentrate on a woman’s face, hairstyle, or clothing and then try to speculate about her.  Using the A Woman of the Century by Generation and/or Occupation exhibits, a viewer may try to study the images of a group of women and look for patterns.  He or she may ask, for example, How did different actresses present themselves in photographs, and how do these images compare to each other and to the images of some of the teachers?

This image is in its own category.  As I was, a viewer might be taken aback and be a bit bewildered by this thought-provoking image.  When was this photograph taken?  Who took it?  Why?  Why would someone want would have her photograph taken while in bed?  Did her family want to have one last photograph to remember this woman by?  It’s possible to speculate that Jennie Casseday was ill and/or bedridden, but her whole story cannot be gleaned by viewing the image.

Jennie’s profile on pages 160-161 of  A Woman of the Century is riveting for many reasons.  Perhaps it was not set up this way intentionally, but the beginning of Jennie’s profile is on page 160, while her image is on page 161.  On page 160, readers would learn that she was a philanthropist from Louisville, KY, that she was an “invalid for many years,” and that she created a flower mission which caught Frances Willard’s attention.  A reader might wonder what “invalid” meant during this time period, and he or she would be impressed that Jennie was able to accomplish so much.  However, the reader would not get to see Jennie’s image until the next page.  After having read about her extraordinary efforts, I wonder if someone’s reaction to her photograph would be different from mine, since I just saw it while turning the pages of the book.  It would be a fascinating reader response study to split up a group of students or museum visitors, giving a third just the image, a third the profile on two pages, and a third a combined profile on one page, and ask each person to write a response about Jennie Casseday.   I found her so fascinating that I selected her as the image to represent the A Woman of the Century by Occupation exhibition on the site.  This way, all viewers of the page will see Jennie and, hopefully, be intrigued to learn more about her and the exhibition.

After reading about Jennie’s life and career in A Woman of the Century, I wanted to learn more about her and to see what her contemporaries had to say.  Fortunately, I found not only many contemporary newspaper articles in Chronicling America, but also an image of her Infirmary for Women and a biography that her sister wrote about her.  I added these sources to her item record in A Woman of the Century: A Crowdsourcing Project of the Nineteenth and Twentieth Centuries and was able to add information from them to many fields and other areas of the item record.  There is additional information available for most of the women in A Woman of the Century, and my contributors and I are striving to utilize a variety of sources to add detailed item records for all of these exemplary women.

Jennie was a remarkable woman who gained the admiration of countless contemporaries.  She is just one of 1470 women in this book, and I hope that A Woman of the Century: A Crowdsourcing Project of the Nineteenth and Twentieth Centuries will bring her and so many other inspirational role models to the attention of people today.

My internship this semester is with the Education Division of the Roy Rosenzweig Center for History and New Media at George Mason.  I’m working with Jennifer Rosenfeld and Nate Sleeter […]

This week, Dr. Kelly shared interviews created by students who took this course at an earlier time.  We had a chance to learn about both the content and the creative […]

Dr, Kelly has asked us to complete this activity: In this activity, begin by reflecting on your reading of “National Parks for New Audiences.” Respond to the following questions in […]

As this week has progressed, I have been doing a lot of serious thinking about the content of what I want to do for my final project and how I […]

As both the semester and my coursework for the Digital Public Humanities Graduate Certificate come to an end, it is time to reflect on both my internships and the DPH […]

The semester is flying by.  It is hard to believe that my internship is almost over and that I will be graduating from GMU’s Digital Public Humanities Graduate Certificate Program […]

During the past few weeks, I’ve been working on a new project for the National Postal Museum.  Calvin has asked me to research several topics related to African-American soldiers and […]

After a wonderful semester with the Education Division at RRCHNM, I’m now interning with the Curatorial Department at the Smithsonian’s National Postal Museum.  My internship director [...]