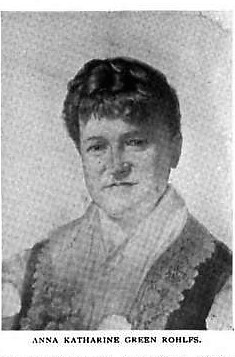 Anna Katharine Green, Rohlfs was born in Brooklyn, NY to James Wilson Green and Catharine Ann Whitney on November 11, 1846. She attended Ripley Female College (now  Green Mountain College) in Poultney, VT, graduated in 1866 and moved back to NY to live with her extended family. Eventually, she got married to Charles Rohlfs, an actor and stove designer who later became an internationally acclaimed furniture designer on November 25, 1884. Mrs. Rohlfs and her husband raised three children; a daughter, Rosamund, and two sons, Sterling and Roland in Buffalo, NY.

Anna became a popular author and novelist. Her early poetic ambitions were bolstered by a meeting with Ralph Waldo Emerson.  She was one of the first writers in the detective fiction genre, and Edgar Allan Poe, Wilkie Collins, and Metta Victor were virtually her only predecessors in the writing of such fiction.  Anna had the advantage of her father, James Wilson Green's career having a major influence on her as he was an attorney who practiced in New York and was involved in many criminal cases. Her most famous detective novels include her first novel, which has been regarded as the first American detective novel, The Leavenworth Case (1878) and Marked "Personal" (1893). Other popular works of hers include, The Defense of the Bride and other poems, Risifi’s Daughter The Sword of Damocles" (1881), "Hand and Ring" (1883), "X. Y. Z." (1883), "A Strange Disappearance "(1885), "The Mill Mystery" (1886), "7 to 12" (1887), "Behind Closed Doors" (1888). "The Forsaken Inn" (1890). "A Matter of Millions" (1890), "The Old Stone House" (1891), "Cynthia Wakeham's Money" (1892).

The Leavenworth Case: A Lawyer's Story (1878)
The Amelia Butterworth Series
The Mystery of the Hasty Arrow
That Affair Next Door
The Forsaken Inn
The House of the Whispering Pines
A Strange Disappearance
XYZ
Lost Man's Lane: A Second Episode in the Life of Amelia Butterworth
The Golden Slipper and Other Problems for Violet Strange
The House in the Mist
The Circular Study (Mr. Gryce #10)
The Woman in the Alcove
The Amethyst Box
The Mystery of the Hasty Arrow
Agatha Webb
The Millionaire Baby
Initials Only
Dark Hollow
The Mill Mystery
The Mayor's Wife
Room Number 3, and Other Detective Stories

Anna's mother passed when she was three years old.

Also, Anna was a progressive woman for her time who succeeded in a genre dominated by male writers but she was opposed to women's suffrage and she did not approve of many of her feminist contemporaries.

Furthermore, Anna had an early ambition to write romantic novels and poetry at the beginning of her career, but when her poetry failed to gain recognition countless times, she shifted to another genre and returned permanently to detective fiction genre from then on.

“ROHLFS, Mrs. Anna Katharine Green,” A Woman of the Century: A Crowdsourcing Project of the Nineteenth and Twenty-First Centuries, accessed December 3, 2022, http://marykatemcmaster.org/WOC/items/show/213.